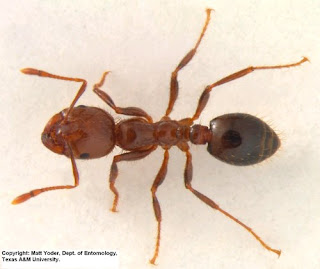 A Red Imported Fire Ants, RIFA, colony can contain hundreds to thousands of polymorphic (different sizes) workers. The nest appears as a mound of dirt usually within an open area having a crust to help weatherproof the nest. The average size is 10-24 inches in diameter and 6-18 inches in height. These ants can have one reproductive queen (monogyne) or have multiple reproductive queens (polygyne) in a nest. These two social forms can exist and they differ in mode of dispersal and density of nests. They are reddy-brown in appearance on the head and thorax but the abdomen is black. It has a ‘super model waist’ correctly called a petiole. 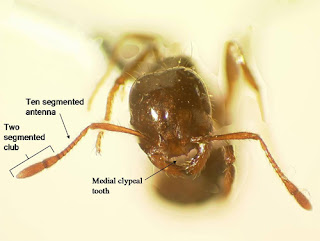 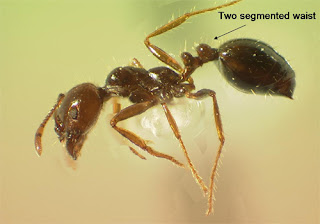 Identifying characteristics on the fire ant workerhead: ten-segmented antennae with two-
The RIFA is an important invasive species which could potentially be damaging to NZ economy and to human health. RIFA  have a toxic sting and there have been deaths associated with repeated stings. They eat almost anything including animal, dead or alive, can damage crops and machinery. They are very protective and aggressive of the nest area. There have been three incursions (new entry into an area by an unwanted species) in 2001, 2004 & 2006 in New Zealand by MAF (Ministry of Agriculture & Fisheries) Biosecurity. In 2001, a single nest was found at Auckland airport. In 2004 a second nest was found at Port Napier in Napier and in 2006 a third nest was reported at Whirinaki, near Napier in a forestry block. Samples were taken of worker ants for identification.
﻿
﻿

Molecular analysis using mitochondrial DNA (mtDNA) instead of nuclear DNA can determine close relatives and the likely source of the incursion. If it is known where they come from additional measures can be put in place to prevent further incursions.  Using alleles, fragments of DNA or more simply put genetic material, from mtDNA can also determine likely country of origin. The gene, GP-9, has 2 main alleles B and b; the monogyne form having BB and the polygyne being Bb. Interesting to note that forms of bb die. Results from testing these incursions showed that 2006 was from a polygyne colony while the 2004 was from a monogyne. The DNA from 2001 was too old to retrieve a sample. Results show there is no single entry point into NZ.
New Zealand has cooler temperatures that make it more difficult for them to survive here limiting incursions to the warmer parts of the North Island. Incursions and spread tends to be accidental by human transport. However the nest found in 2006 is suspected to have been present at least two years and not related to the 2004 incursion. Social forms determine management strategies. Polygyne nests tend to be larger but fertile queens may leave once winged and travel short distances from the parent nest. They also may be monogyne. It has been theorised that the larger nests may be able to cope with NZ winters as they can generate a higher stable internal temperature.
References
Corin, S. E., Ritchie, P. A. & Lester, P.J. (2008). Introduction pathway analysis into New Zealand highlights a source population ‘Hotspot” in the native range of the Red Imported Fire Ant (Solenopsis invicta). Sociobiology, 52; 129-143.
Miller, D. & Allen, H. (2010), Red Imported Fire Ant (RIFA),Publication 444-284,Virginia State University; http://pubs.ext.vt.edu/444/444-284/444-284.html
﻿
Posted by Jenny Brookes at 13:58